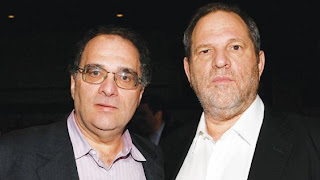 There's peace in a dispute that labeled Harvey and Bob Weinstein as "a real life version of Bialystock & Bloom" and Tony Leech and Brian Inerfeld as "vindictive Hollywood talent."

A high-profile lawsuit that was particularly nasty

The lawsuit came from writer-director Tony Leech and film producer Brian Inerfeld who alleged that their work on the animation film Escape From Planet Earth was botched.

The plaintiffs brought the lawsuit on the eve of the of the 2011 Oscars, alleging $50 million in damages from "two out-of-control movie executives... who sabotaged what should have been a highly profitable movie through a potent combination of hubris, incompetence, profligate spending, and contempt for contractual obligations."

What's more, Leech and Inerfeld cast Harvey and Bob Weinstein in the complaint filed in New York Supreme Court as "a real life version of Bialystock & Bloom" and accused the pair of paying them $500,000 in "hush money" to keep the dispute quiet before King's Speech took home the Best Picture prize at that year's Oscars.
The Weinsteins hit back.
In a motion to dismiss that was later filed in the case, TWC attacked the plaintiffs' allegations as "little more than the bitter ramblings of vindictive Hollywood 'talent,'" dredging up message board posts allegedly from Inerfeld that promised, "I'm going to crush [Weinstein], move into his house, drive his car, and f*kk his wife, his lawyers' too."
Beyond the vitriol, the case was a rather common breach of contract claim.
Leech and Inerfeld, who created the 2005 Weinstein hit Hoodwinked, signed a deal whereby they allegedly were to receive at least 20% of Escape's adjusted gross profit.

But the film had a turbulent development process, and the plaintiffs claimed that the Weinsteins repeatedly unlocked the script, forcing rewrites at least 17 times, which they say "eviscerated" the movie's budget by keeping 200-plus animators on payroll.

The Weinsteins found new financiers, but at the cost of 25 percent of the film's gross receipts and 100 percent of all foreign gross receipts -- which Leech and Inerfeld believed had came at the expense of their upside. Earlier this month, a judge dismissed claims against the financiers.

As the litigation happened, the Weinsteins hired Cal Brunker to take over as the film's director.

Escape From Planet Earth was somewhat quietly released on February 15th, then savaged by critics and is limping towards earning back its reported $40 million production budget, which likely doesn't count the money that was paid by TWC to the prestigious law firm of Boies, Schiller & Flexner.