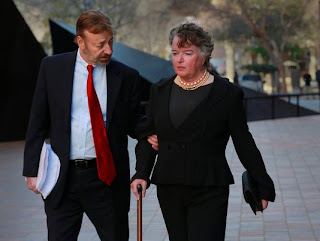 Former San Diego Mayor Maureen O'Connor was booked Friday on a federal charge of taking $2 million from a charitable foundation to feed her gambling addiction.

U.S. Magistrate Judge David Bartick ruled that O'Connor, once she was booked and fingerprinted, could be released without bail. O'Connor is said to be destitute.
Officials said she was never handcuffed.

O'Connor, 66, appeared in federal court Thursday to acknowledge that she took more than $2 million from a foundation established by her late husband, Robert O. Peterson, the founder of the Jack in the Box restaurant chain. She took the money during an eight-year binge of gambling in which she won and then lost more than $1 billion, according to court documents.

Under a plea bargain, O'Connor was allowed to plead not guilty but required to agree to pay restitution to the R.P. Foundation, which became insolvent in 2009 because of her misallocation of funds meant to be used for medical research and programs for the sick and underprivileged.

When she had spent the fortune left to her by her husband--estimated by her lawyer as worth $40 million to $50 million--she sold various property holdings and belongings, including her art collection. She took out second and third mortgages on her home in La Jolla.

When even that was not sufficient to pay her gambling debts, she took $2,088,000 from the foundation, where she was a trustee. Taking money from a nonprofit foundation for personal use is illegal, prosecutors said.