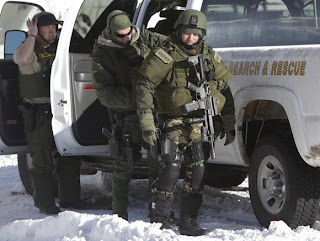 Christopher Dorner was engaged in a shootout with federal authorities in the Big Bear area Tuesday, a law enforcement source told The Times.

The shooting occurred after Dorner burglarized a home, tied up a couple and stole their car, the source said.

It was not immediately clear whether Dorner was in custody.

A second source said there was an active crime scene but did not have details.

Meanwhile, an associate of Dorner was being tracked by investigators, according to court records that suggest Dorner may have received help as he eluded a massive law enforcement dragnet.

Dorner, 33, a former LAPD officer, has evaded authorities since Wednesday night when he was named as the suspect in the slaying of an Irvine couple, a crime that preceded a wave of violence.

A criminal complaint filed in federal court raises the possibility that Dorner may have been assisted by an associate identified as "J.Y."

About 30 officers were involved Monday and the San Bernardino County Sheriff's Department said about the same number would be out again Tuesday.

Authorities also asked residents in the Big Bear area with security cameras at their homes to review any video recorded after midnight Feb. 7 to see if images of Dorner had been captured.

The records state that the manifesto was discovered by authorities Wednesday, three days after the slaying of the two Irvine victims: Monica Quan, a Cal State Fullerton assistant basketball coach, and her fiance, Keith Lawrence, a USC public safety officer.

Quan was the daughter of a retired LAPD captain whom Dorner allegedly blamed in part for his firing from the force in 2009.

The first shooting was in Corona after an eyewitness reported a person matching Dorner's description at a gas station, telling an LAPD officer "who was detailed to the area to protect one of the officials whom Dorner had threatened," according to the court records.

Riverside Officer Michael Crain, 34, a married father of two who served two tours in Kuwait as a rifleman in the Marines, was killed in the attack. His partner remains hospitalized, Police Chief Sergio Diaz said, and it was unclear if he would be able to return to active duty.

Dorner was charged Monday with one count of murder, with special-circumstance allegations in the killing of a peace officer and the discharge of a firearm from a vehicle, in connection with Crain's death. He faces three additional charges of attempted murder.