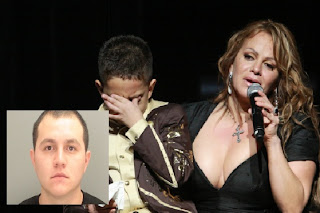 Michael Marín Rivera -- the eldest son of late Mexican singer Jenni Rivera -- was arrested in Miami on Thursday for minor acts of vandalism.

Miami Beach police confirmed that Trinidad Angelo Marín (his real name) was arrested Thursday morning after an anonymous call. The charges imposed for destruction of public property. He allegedly caused between $200 and $1,000 worth of damages. As if the family doesn't have enough to deal with already!

Rivera's family was in town for the Premio Lo Nuestro awards.

Michael has been arrested in the past, too, for having sex with a minor. However, Michael has a baby girl and his sisters recently described him as a "very good father." Was alcohol is at the root of this young man's arrest. Partying in Miami Beach, plus the pressures of being a new dad, and dealing with the death of his mother, could all have led to his latest missteps.