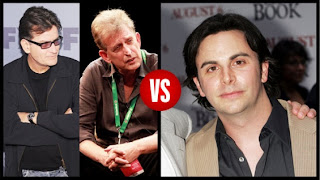 Joe Roth, producer of FX's Charlie Sheen sitcom Anger Management, has filed new papers in a $50 million legal battle over the sitcom, saying that he kept his promises to another producer who spent two years developing the property for television.

The original lawsuit came from Jason Shuman and his Blue Star Entertainment, who alleged nearly a year ago, before the series premiered, that Roth's Revolution Studios "refused to honor its written producer agreement" by denying him compensation and a producer credit on Anger Management.

According to Roth's motion, "Plaintiffs have obviously tacked their fraud claim against Roth onto their breach of contract action against Revolution in an unsubtle attempt to intimidate and embarrass a very successful high-profile figure in the entertainment industry (the former chairman of both the Disney and Fox studios) with negative publicity and the annoyance of meritless litigation. Plaintiffs' fraud action against Roth should be summarily dismissed."

Shuman previously worked with Roth to develop the TBS series Are We There Yet?

But Shuman wasn't happy about his compensation on that project. Roth is said to have told Shuman that he would "make it up" by giving him significant backend ownership and producer credit on the next motion picture property that was turned into a TV series.

And that's exactly what happened, according to Roth.

In 2009, the parties signed a new agreement for Are We There Yet? that Roth says contained an integration clause that superseded prior agreements. Roth says that Shuman's company got $500,000 in total fixed compensation, that Shuman got producer credit and that Blue Star got 2.5 percent of any backend.

Roth also is getting an assist from Sheen himself, who submitted his own declaration (read in full here). According to the actor, he participated in a meeting a few months after departing from Two and a Half Men, where he heard a pitch for Anger Management.

Sheen's filing goes through the various meetings he held as well as the character suggestions he offered -- e.g. former ballplayer whose career is shortened by inability to control anger and who now provides services to prison inmates -- and eventually gets around to saying, "At no time during any of these meetings do I recall anyone mentioning the names Jason Shuman, William Sherak or Blue Star."