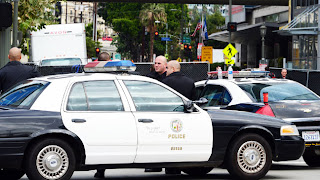 Meanwhile, the Los Angeles Dodgers and AEG are among 29 donors contributing to a $1 million reward for information leading to his arrest.

A $1 million reward has been offered for information leading to the capture of Dorner, 33, who is accused of killing three people, one a police officer, and wounding two others in cold blood. Police say he is seeking revenge against several former LAPD colleagues whom he believes were responsible for his getting fired.

Dorner posted a rambling manifesto on his Facebook page, in which he pledged to stalk police "where you work, live, eat, and sleep" while professing his admiration for stars like Ellen DeGeneres and Piers Morgan.

He also wrote: "I assure you that Incident Command Posts will be target-rich environments," which refers to the mobile headquarters that police set up at special events.

CBS reporter John Miller, a onetime aide to former LAPD chief William Bratton, told the New York Post that the authorities “have an anxiety level higher than we’ve ever seen it. You’re going to have a major police presence" at Sunday's Grammys.

Police have been searching the area around Big Bear mountains outside of L.A. after discovering Dorner's burning truck there Thursday, but the hunt for the ex-cop has spread to at least three states so far.