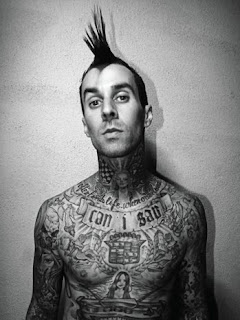 "I still haven't gotten over the horrific events that took place the last time I flew when my plane crashed and 4 people were killed," the drummer stated.

Travis Barker won’t be taking his seat behind the drumkit for Blink-182’s upcoming Australia tour.

The dynamic drummer has developed a phobia of flying after he was a passenger on the fatal September 2008 plane crash in South Carolina which killed four others. Barker was badly injured in the crash and another survivor, Adam Goldstein – aka DJ AM -- has since died of an accidental drug overdose.

Clearly Barker’s not yet overcome the experience. He never even joined his bandmates on the flight Down Under this past weekend.

“I'm sorry to announce I won't be joining Blink-182 on this Australian tour,” he writes on his Facebook page. “I still haven't gotten over the horrific events that took place the last time I flew when my plane crashed and 4 people were killed, two being my best friends.”

He continues, “I gave the band my blessing to take another drummer if they still wanted to do the tour without me. I hope to come to Australia again some day perhaps by ship if need be. Unfortunately, there wasn't a boat that worked with the schedule this time around. Once again I'm sorry to all the fans.” After the plane crash, Barker sued claiming the companies improperly operated and maintained the Learjet that overshot the runway and burst into flames. He’s since settled his lawsuit.