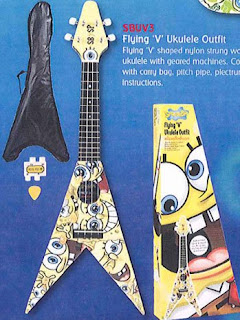 A musical instrument that features the face of a famous Nickelodeon character produces the sound of dissonance.

Viacom to a California judge: Put down that SpongeBob SquarePants Ukulele!

Last week, Viacom sought to dismiss a lawsuit that was brought in late December by Gibson Guitar Corp., which asserted that the owner of the Nickelodeon TV network was promoting various products in the United States that infringed its trademark rights to the words and design of the "Flying V," its more than five-decade-old electric guitar known for its distinctive look.

But Viacom says that Gibson has identified only one product  -- a SpongeBob ukulele -- and that the instrument is not manufactured or sold inside the country. As a result, Viacom is looking to have the case tossed because of a lack of subject matter jurisdiction.

This isn't the first time that Viacom and Gibson have tangled in court.
Most notably, Gibson Guitar sued Viacom five years ago for allegedly violating a patent on "technology for simulating a musical performance" for the video game Guitar Hero, which was originally created by Harmonix, then owned by Viacom. The lawsuit was settled in 2010.

Now the companies are back in a courtroom.

In the lawsuit, Gibson claims that Viacom intended to cause "confusion, mistake or deception including the misleading of consumers into mistakenly believing that the Defendants' Unauthorized Products are made directly by Gibson pursuant to Gibson's strict quality control standards or Gibson has authorized or licensed the use by Defendants of the Trademark for those products."

But Viacom says that Gibson's claim "is doomed as a matter of law" because none of the alleged infringing acts were performed inside the United States.

Viacom says the SpongeBob ukulele was manufactured in China and offered for sale by U.K. musical-instruments vendor John Hornby Skewes & Co. That company had a license on SpongeBob trademarks, but Viacom adds that the licensing agreement expressly precludes the marketing of the ukuleles in the United States.

A judge is asked to dismiss the case on jurisdictional grounds. Among the cases cited as precedent is a lawsuit brought by Mike Love of The Beach Boys over the sale of an album of "cover versions." The lawsuit was knocked out after a court found that the album was conceived in the United Kingdom and manufactured in Germany, with no sales in the United States. When it got to the Ninth Circuit in 2010, a circuit judge remarked snarkily, "Love wishes they all could be California torts."