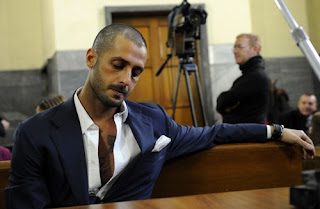 Fabrizio Corona, Italy’s most famous paparazzo, reportedly emerged in the Dominican Republic on Tuesday, after a Europe-wide arrest warrant was issued for him.

Corona, 38, was convicted Friday of extortion for demanding a bribe from French-Argentine soccer star David Trezeguet to withhold publication of potentially embarrassing photos. He was sentenced to five years behind bars but he did not show up in court for the sentencing.

His flight from the court’s jurisdiction will add an additional 34 months to his prison sentence, and thanks to the European Union arrest warrant, he can be apprehended by authorities if he sets foot in any European country. But that seems unlikely, at least in the short term: Italian media reported Tuesday that Corona had been spotted in the Dominican resort town Casa de Campo.

Corona, who calls himself the “King of Paparazzi,” has long denied blackmailing celebrities. He has said he simply offers them a chance to buy the compromising photos for the same price he would earn selling them to a magazine.

His alleged victims include many of the best-known members of the entertainment, political, business and sports world in Italy and Europe. Many are unconfirmed, but those whose names have been reported in the past include Fiat heir Lapo Elkan, soccer stars Francesco Coco and Adriano, TV hostess and singer Michelle Hunziker, motorcycle racer Marco Melandri and Barbara Berlusconi, daughter of billionaire media tycoon and three-time Italian Prime Minister Silvio Berlusconi.