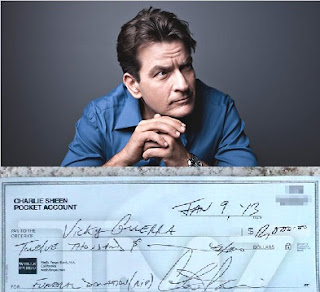 Charlie Sheen is covering a huge chunk of the funeral costs for the paparazzo who died while covering Justin Bieber ... cutting a $12,000 check to the photog's family ... TMZ has learned.

We broke the story ... 29-year-old Chris Guerra died after being struck by a car in Los Angeles on New Year's Day while taking pictures of Bieber's car.  We're told Guerra will be laid to rest in a private service set for tomorrow

Turns out, Charlie is tight with a former photog who was friends with Guerra ... and got word that the family was trying to raise money to cover the costs. So Charlie, being Charlie, sprung into action and grabbed his checkbook.

Sheen was quoted as saying: "A tragic incident like this erases the line between the photographer and the subject. It's an unforgiving moment that begs us all to be human and work as one to prevent this in the future."